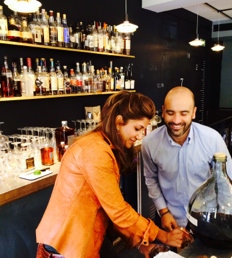 Getting settled in involves running to the store to get supplies like laundry soap, bathroom organizing trays, etc. But here, in Paris, you can’t get it all in one trip, because you have to hand carry it back …on foot, to your place. So that means many many trips. It is a bit exhausting. And quite tedious. (For kiddo, it is super boring.) But, also stressful because for each shopping trip, you have to interact with other people and kiddo and I are really not able to communicate. So each thing becomes more loaded up, literally.

So when the fine spirits store guy mentioned he was doing a scotch tasting the next day, it was tempting to go take a break from the tedium, and check it out. Met up with Tim and Nancy again, joined by their two friends … Fellow professorial types. And we tasted. The guy — the manager of the store, Stanislaus, asked me later what I thought. I got right into the French tradition by actually telling him what was good or not rather than just doing the nice-nice thing that the French dislike about Americans. That got him clearer on my tastes so he let me taste something he had created recently — scotch blend and … I loved it so much that he let me bottle some up for myself and take it home.

So first purchases include soap, detergent, …and a scotch blend. Priorities. 🙂