Now that we’ve been here for five months, the one thing we notice is the subtleties of manners.

In the US, if you go to a restaurant, you are expected to check-in and wait to be seated ONLY if it’s a super tony place. In France, you are expected to say good evening, and that you are there for dinner, that yes you’ve made reservations, and would it still be possible. You assume nothing about whether they would like to serve you. You ask if you can join them.

About two months ago, I asked if I could have a pen from a cafe owner because I needed to write something down. I was with Alexa Clay and I was going to tell her some metro stop info. I was pretty proud of myself with “Puis-je prendre une stylo” but today I would say it more like, “Bonjour, Monsieur; puis-je vous déranger avoir d’une stylo?”. In other words, you don’t say, “May I have blah, blah, blah”, without first acknowledging that you are interrupting them and that you must acknowledge the trouble and your respect for them BEFORE you go onto your thing. You must first build a bridge of connection … 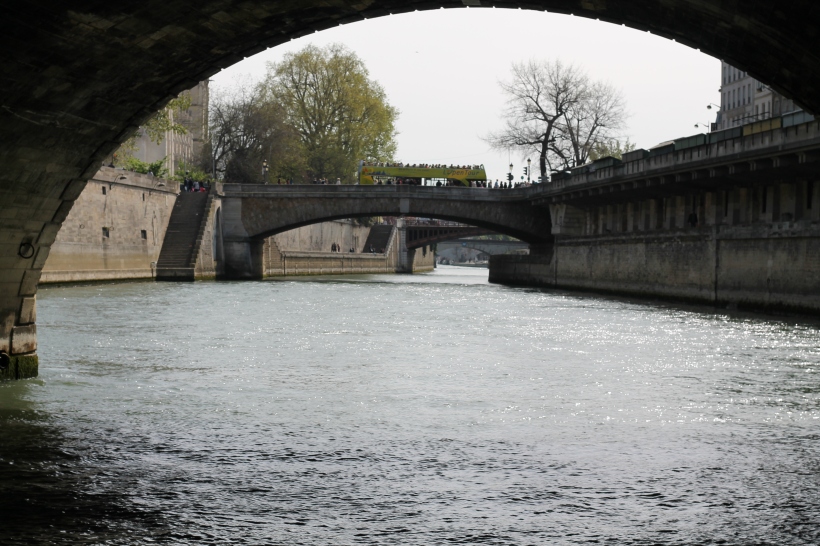 … before you can get something done.

This word, déranger seems to be crucial in this interaction. Just a few days ago, Lev Rapheal over at Huffpo, wrote “Being Polite in France Isn’t Complicated, But It’s Crucial.”

But you have to be pretty fluent to know how to say it. So I think he’s being a little dismissive of the language barrier.  We went into a book store in Auvers-sur-oise and the staff were having lunch and we felt bad about bothering them, but we didn’t say anything. Now we know more. Whether the words come out at a particular time is less clear.

Underneath (dessous) all this politeness is a general belief that all people deserve respect. You treat the cashier well, the server well, the storekeeper well, the guardian well, the ticket sales person, and so on. Not because of their rank or status in society but because all people deserve respect. Because it’s how you are raised. Because this is how the world should work. Now that I notice this with so much more subtlety, I keep noticing how much Americans don’t do this well, or AT ALL. They step up to a ticket booth and say “two tickets” not “two tickets please” or even “Bonjour, May I have…two tix, pls”.

Now it grates me. When I went back to the US for a meeting at Walmart in Bentonville Arkansas, about 8 or so weeks ago, I was in line at the Embassy Suites for custom omelettes first thing in the morning. I said hello to the young man, I asked if he could make me something with xyz, and after he said he could, I said, well, It would make my morning and thanks. He stood up a little taller, I noticed. And as I waited for mine to be cooked, I watched 8 people walk up to him and without acknowledging him at any individual level, they said “scramble” or “veggie omelette” but sans thanks, and certainly sans respect. It seemed to me I had changed, not America or Americans. Being in Paris helped me see something about the two places, that I didn’t see before.

Even without leaving Paris and having that kind of comparative experience, even Kiddo notices it. He rolls his eyes when he hears Americans talk. He wants to fix it for them. To teach them better. Curt has gotten much more conscious of his manners, though we all know we could get better at our interactions.

And if I was in charge of import/export stuff, THIS is 1 thing I’d like exported from Paris, to around the world. THIS, and the fromage. Well, and the chocolate. But definitely THIS.

2 thoughts on “What You See Anew”