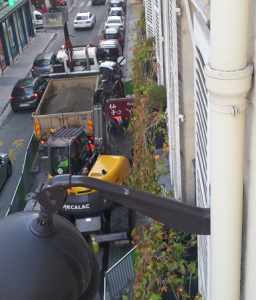 6 months now.  The blogging dry spell signals a lack of inspiration.  Just this morning I got inspired.  How?  Well, for 15 of our 16 months, the building across the street was being renovated, including installation of an underground parking garage.  (It seems more people own cars now than when the building was first put up in the 1890’s.)  Lots o’ jackhammering, etc.  Always some new and delightful way to make the entire apartment shudder and shake.

But it finally ended last month!  Yay!  Just at the end we were spooked by an unrelated street project wherein the GdF was replacing the local gas pipelines (lingering evidence visible in the dark patches in the sidewalk across the way).  But that was pretty short-lived, a week or less, and actually finished before the apartment project.  You might just be able to imagine our collective sigh of relief as we began to grasp that we might be done with the daily drumbeat of noise.

This morning something new…  There was a bit of activity this morning with the little green separator walls this morning, I noticed when returning from walking Kiddo to school.  I actually thought “Hey, this looks like good news… maybe they will be removing those yellow plastic parking-blocker posts (one is just visible in bottom of the photo) from the street… The last vestige of the building renovation is disappearing!”  Uh, no. Just as I began a phone call, the building shuddered when an extra jumbo machine punched a hole in the sidewalk.  No idea what they are up to (unlike the GdF project, there were no signs posted in advance), but whatever it is requires the removal of a truckload of earth.

The upside: this week mom is in San Francisco area for a business meeting.  Timing of the trip seemed annoying for various reasons, but since she managed to miss out on the latest rock-busting concert on our doorstep, maybe it was a blessing in disguise?  It depends, of course… Will they finish before she gets back?  Fear not!  A new neighborhood effort aimed at cracking the earth’s crust or rerouting the Seine will be along soon!

This is probably not specific to Paris, just life in a big city.  Nevertheless, I’m just a wee bit wistful for our quiet suburban home in California.  On the other hand, my fresh new cynicism tells me to stop romanticizing things… No doubt the dilapidated house next door in California will undergo scraping and reconstruction the day we move back home.  And here in Paris, this sidewalk root canal will be over soon. I resolve to appreciate quiet days one at a time.

I enjoy contributing to solutions at Appropedia.org.