As of Thursday, we’ve chosen a school that “gets” kiddo and we all like.

The path to this was long in coming. We had asked many friends of friends that had been to Paris for extended stays what school they chose, and why. The EABJM Jeannine Manuel kept showing up. We learned it was an elite private school, known for it’s academically strong bilingual program. Back in June, 2013, we had done a 2nd school tour (where we ran into a lovely friend, Katie Stanton, and her family — a delightful surprise for everyone!), and kiddo really liked it as compared to the small friendly school we compared it to in the 9th (the WI program) The science program was rich, with independent lab areas, and the art program made me want to register. It was clear it would be demanding, but seemed worth it.

Aaaaaaand got rejected. Hence, this Post over on FB on a Friday afternoon…

A great friend, Susan McPherson, reached out after seeing the ambiguous news, and asked if she (or her partner Fabien) could help. Nothing like having friends from across the country help you get back up off the ground.

This gave us an idea to get an appt with EABJM; one part was to plead our case, the second was to learn why. Only after that appt with the director of admissions, Madame Bosc, did we share the (bad) news with kiddo. EABJM expects kids — even boys at kiddo’s age — to be “self-managing” and thought he had a “bad attitude”. Hubster and both I felt our chin tremble a little. His 5th grade teacher, however, said to shake it off, saying that kiddo has yet to develop the study habits he needs and is still learning.  She felt very strongly that kiddo LOVES school and loves to learn, but he gets bored easily by the public school curriculum (and hasn’t yet figured out how to manage that boredom, and direct it in positive ways).

In the end, getting rejected turns out to be a near-miss that helped us find the better path for us.

Madame Bosc directed us to another school that would “get” him better, Hattemer. And other friends and extended network who live or have lived in Paris all helped identify other schools. Gotta love the network. And the help. Although many people pointed us to Marymount and the ISP, those were programs that would keep him in an American-bubble. If we wanted that, we should probably stay home. Which would be both cheaper and easier. Eurocole was identified as a great French program with a strong bilingual program, along with Victor Hugo.

We scheduled the three visits. By the time we got to Hattemer, we knew we had found a winner.

Kiddo chose Hattemer even though it meant a tougher academic program and a haaaaaaaard path ahead — it requires learning French intensely this summer so he can have a running chance at the program. So, so proud of him and his courage.

Probably the tipping point for us parents was learning Hattemer’s philosophy at the school is to address the kids in the formal and more respectful vous vs the more informal (and slightly condescending) tu. It is a small sign of a big choice — they want to regard the kids for who they are, and what each distinctly has to bring. That’s quite (!) a novel approach for French schools. 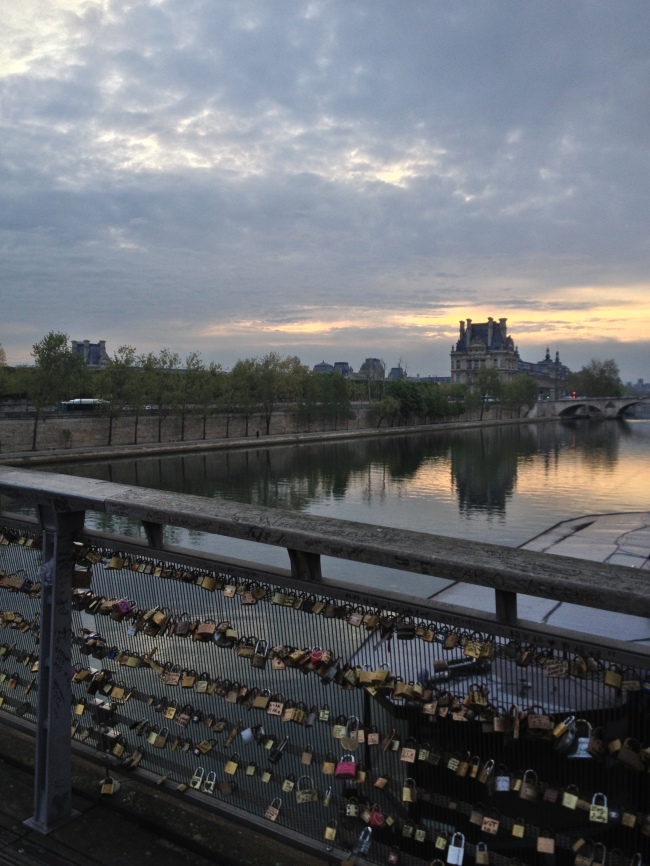 We still have some paperwork to do, but we’re settled. Phew. Our new path to school is in the picture — crossing the Soferino footbridge, as we head towards the Tuileries, with the Louvre in the background.