The last week I have been staying with my “Tante” Joanie.  It was quite fun. We have been logging what we have done so I will re-inscribe it here.  One of the main events that we did was doodling. She is an art teacher, so that works well. Here is something that I made:

I made the “In The Lunchroom” Type of thing because of the gross “Cantine” Food that we get for lunch.

Another thing we did was go to the Musée d’Orsay, which was pretty cool, cause we got to see Van Gogh’s portrait, Which in French they pronounce the G in. Also, there is this epic restaurant on the top floor! If you didn’t know, Musée d’Orsay used to be a train station, so you can look out of the clocks, which have transparent faces and backs. We looked for a painting featuring the Battle of Solferino, but the search was rendered fruitless.

We watched ratatouille too, and that was très intéressant,  seeing as we were in the same city as the movie was based in. But, it was also extremely annoying. I mean, they cover the sights, and the taste (of the food), but the smells and sounds are just fiction.

So, that was a little recap of da week. See ya later! 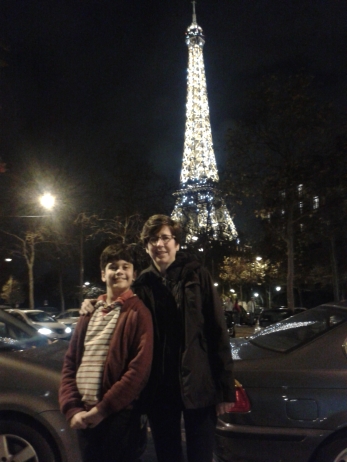 Wait! We just went to the Eiffel Tower again and took a pic! Cool!